Fresh ideas are growing every year, which has increased the competition for the gaming industry. But game development trends are working as a solution for them.

Games are always a good source of entertainment for people of all ages. It is a vast world embedded with multiple technologies, genres, with solutions, and much more.

Game development includes creating and releasing a game done by artists, animators, programmers, writers, and designers. With constant high-tech breakthroughs, this industry continues to flourish at a breakneck pace. Over the past years, people have been playing with a limited number of consoles, but now the software allows for cross-playability.

Is Game Development In High Demand?

This industry is experiencing miraculous success. According to Mordor Intelligence, the market value of game development was USD 198.40 billion in 2021, and it is forecast to rise to USD 339.95 billion by 2027. There is a hike in demand for professionals in this field. 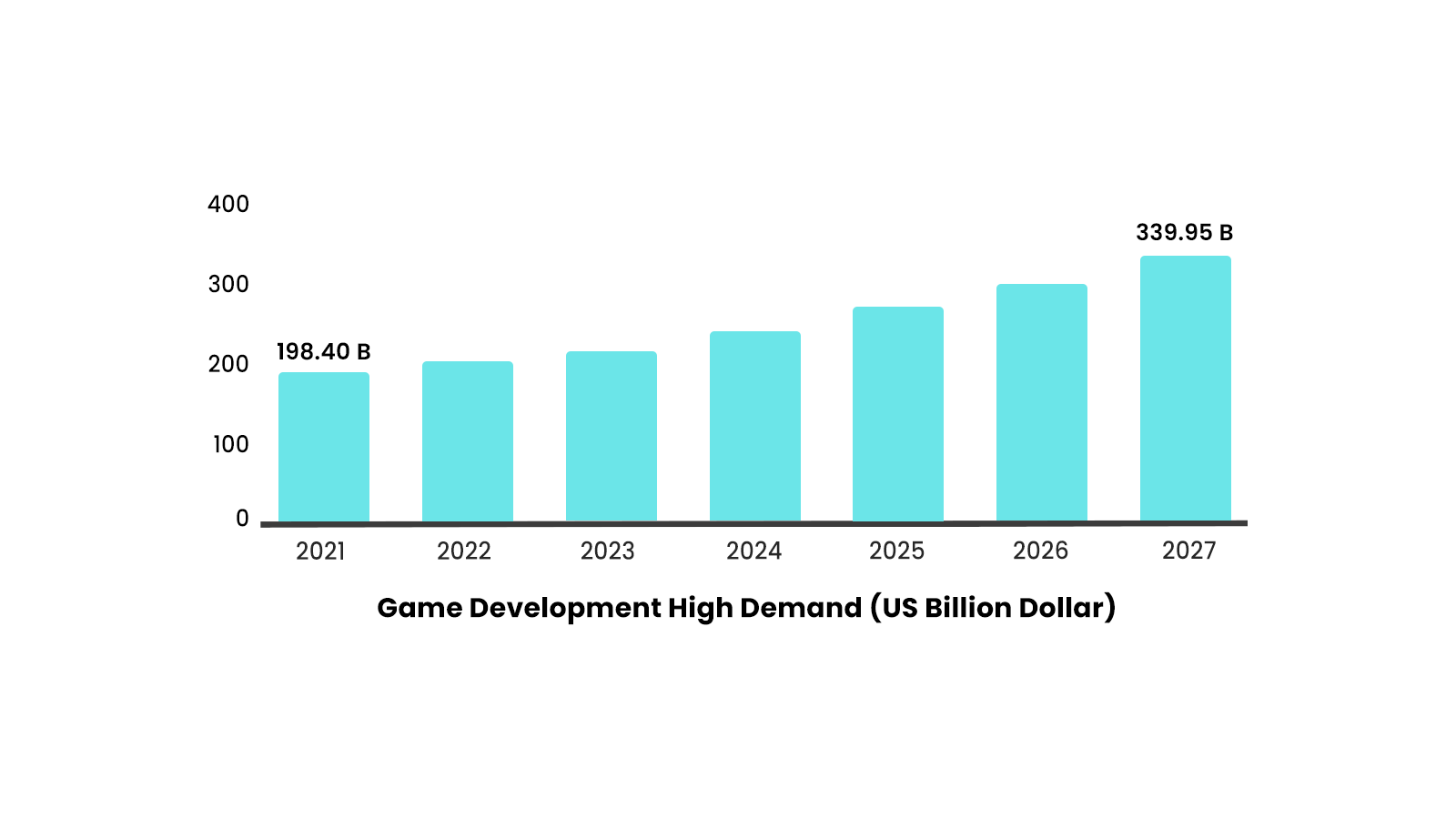 It is the only market that continues to grow, despite an economic disruption (amid a pandemic). Technological advancements and innovative ways to deliver entertainment makes gamers come back for more.

What Are The Current Trends In Game Development?

There are several next-generation influential trends that anyone in the gaming industry should monitor.

One of the most popular trends, Augmented Reality, is providing gamers with a more engaging experience. Once developers become proficient with this technology, they start processing several new ideas for their applications. 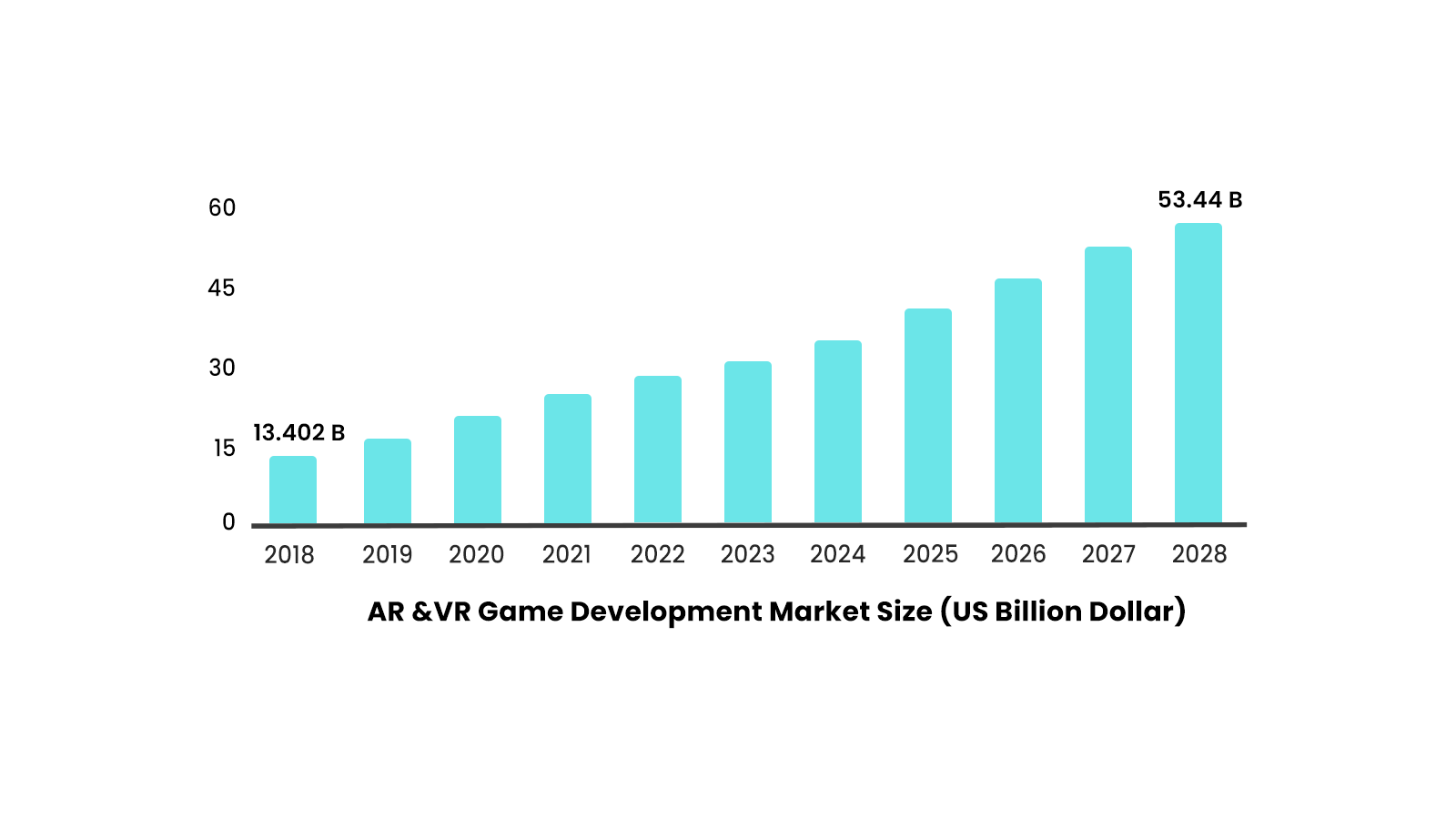 Virtual Reality creates an innovative 3D environment with a high level of engagement and immersion for every gamer. Its global market was at USD 13.402 billion in 2018 and is projected to grow USD 53.44 billion by 2028.

It refers to streaming yourself while playing on the internet so that others can watch you on their computer, phone, or gaming console. Its global market size was USD 40 billion in 2019, and the forecasted CAGR through 2030 is 18%.

Live Streaming Technology allows you to reach a larger audience by watching, creating, and sharing videos in real-time. All you need is an internet-enabled device, like a smartphone or a tablet, and a platform (such as a website or an app).

Electronic sports are described as competitive video games. It comprises amateur and professional players who compete against each another for a cash prize. Gamers can participate individually or with a team. Platforms like Twitch, YouTube, Facebook and Discord have enabled Esports technology.

According to our research, in the first quarter of 2018, 17.9 million hours watching gaming channels. Its market is projected to CAGR of 20% during the forecasted period, 2021-2026.

It is also known as cross-compatible or cross-platform play. With online game functionality, players can use a specific video game console to play with a competitor who is using a different hardware, such as another console or a computer.

For example, If you have a PS5 and your other two friends have Xbox Series X and a PC, then this technology will let you all play together. It is a key trend that recently arrived in the development sector.

For Cloud games, all you need is a stable internet connection. It will change the way you play.

It is also known as the NFT game and a crypto game. In the development sector, it is one of the most popular technologies. It offers players complete control over the digital assets they earn or gain through participation in the game.

It is a video game that includes elements having cryptography-based blockchain technologies. This will expand the game tent overall to include players motivated by earning. It is equipped with powerful data encryption technologies to prevent hackers from modifying or destroying an online transaction.

It is a video game that targets a mass-market audience, as opposed to a hardcore game, which is targeted at hobbyist players. Casual games are easy to play with simpler rules, shorter sessions, and require less learned skills.

There are categories like endless runners, education, trivia, puzzle, hidden objects, adventure, word games, and much more for the game development. This type of games can be played during a short break and that is why people enjoy playing them every day. Moreover, these games have no age restriction. Some of the most popular casual games include Candy Crush Saga, Angry Birds 2, Among Us, and Helix Jump.

What Will Be The Future Of Game Development?

As constant changes and new trends emerge every year, it becomes necessary to master the trends and accept the challenges. Technological advancements bring up opportunities for the game development sector to innovate. Public demand has grown due to the pandemic.

With the rise of game development trends, industries are planting the seeds of fresh ideas every year. Growth is coming and developers will seize the opportunity.

Read More: App development trends that fulfill the demands of users every year with innovative technologies and useful functionalities.

Unity is a top-rated game engine that allows you to develop real-time 3D projects for Android, iOS, and web platforms. It offers high-quality, next-level visual effects. You can create fantastic games with a variety of intuitive tools available on this platform.

This cross-platform has a 48% market share in the development market. It creates great 3D graphics for AR/VR applications, mobile games, console games, and many other games. The cost-efficient and time-saving game engine develop highly interactive games with the unrivaled flexibility of deploying the projects on several platforms. Unity game engine support assets such as Blender, Maya, 3Ds Max, and many more.

It is a great option for the Photorealism effect. This is popular among developers as an AAA game engine that provides high-quality graphics always (whether you are creating pure CG or blending in live-action footage) for a game project and you will not require installing different graphic engines.

Unreal Engine 5 will work as a game changer for your game application and improves performance. Its defining feature or a great working tool is Temporal Super Resolution (TSR), which will allow your game to have near-native image quality. You can create a short action movie in Unreal Engine 5.

Most preferred game engine or a tool by developers. Its Flowgraph feature creates an astonishing and fascinating game environment. If there are any changes in the object, the content is automatically compressed, optimized, and converted. Its multiple engaging features make the games more realistic. It is a game development tool for 2D games and also offers 3D graphics. GameMaker Studio gives you everything that a developer or designer required for game development. It has innovative features such as real-time analytics, multi-player networking, source control, and extensibility through third-party extensions.

GameMaker Studio is wrapped with built-in editors for animations, images, and shades. It helps in developing applications like multimedia tools, simulations, video games, virtual reality, and many other software applications. Murder in Hotel Lisbon (PC), Aces of Luftwaffe (Android), and Spelunky (PC) are games developed with GameMaker Studio.

This is easy to use tool, whether you are an experienced person or a fresher. Professionals can work with a powerful programming language, while beginners can have a drag-and-drop interface, as coding is not necessary to create games. GameMaker Studio with a paid version supports several platforms like HTML5, iOS, and Android, whereas a free version supports the Windows platform only.

Cocos2D is a widely used framework for the development of game applications and other cross-platform GUI-based astonishing programs. There are different types of Cocos2D-x, Cocos2D-html5, Cocos2D-XNA, and Cocos2D-objc.

Construct is an HTML5-based video game engine for 2D games. It makes the game development process easy for non-programmers to develop a game with visual programming. You can have its other versions; Construct 2 and Construct 3 as well.

Construct 2 creates prototype quickly and make games faster than other tools. It has a simple visual interface and several useful features such as movements, fade, platforms, path-findings, and many others. It does not require any programming knowledge therefore professional developers and beginners both can use this tool.

Along with professional developers, teachers or tutors of game development can also use it to guide their students. It is used for both; Android and iOS platforms. Before the compilation, you can view your game on the internet and it is a time-saving feature for game applications. With special visual effects like pixels-shader effects, blend modes, and particle systems, you can develop amazing game applications.

Innovation To Be At Its Peak

The market will continue to rise as more and more people get attracted to gaming.

Game development not only concerns much better graphics, but developers also add features that reflect the needs of modern society.

The above-listed technologies will help you stay ahead of the competition and bring user engagement to a new level. Keep an eye on game development companies to see what surprises 2022 has in store for gamers.

Game development is the art of creating games, with an innovative mind. A game with a new concept and engaging graphic design requires developers, designers, animators, and testers, or some games can be developed by a single game developer.

It is the fastest-growing industry, with $26.29 billion in 2022, and it keeps experiencing miraculous success in the development sector. The global market reach of the gaming industry will rise to $339.95 billion by 2027.

From a child to an adult, everyone is playing games and creating a demand for more entertaining games. Therefore, game industries update themselves with new technologies and trends, which makes them booming every year.

Nowadays, several new technologies have been introduced for 3D designing. AAA-category games are high-profile games that have more interactive and realistic graphics. Horizon Forbidden West and Ghost of Tsushima are the most realistic games of 2022.

We will see Virtual Reality (VR) and cloud gaming take the lead in the future of games. This will create more immersive gameplay for users, and smartphones with powerful graphics processing capabilities will help them not have to buy expensive gaming consoles in 2030. 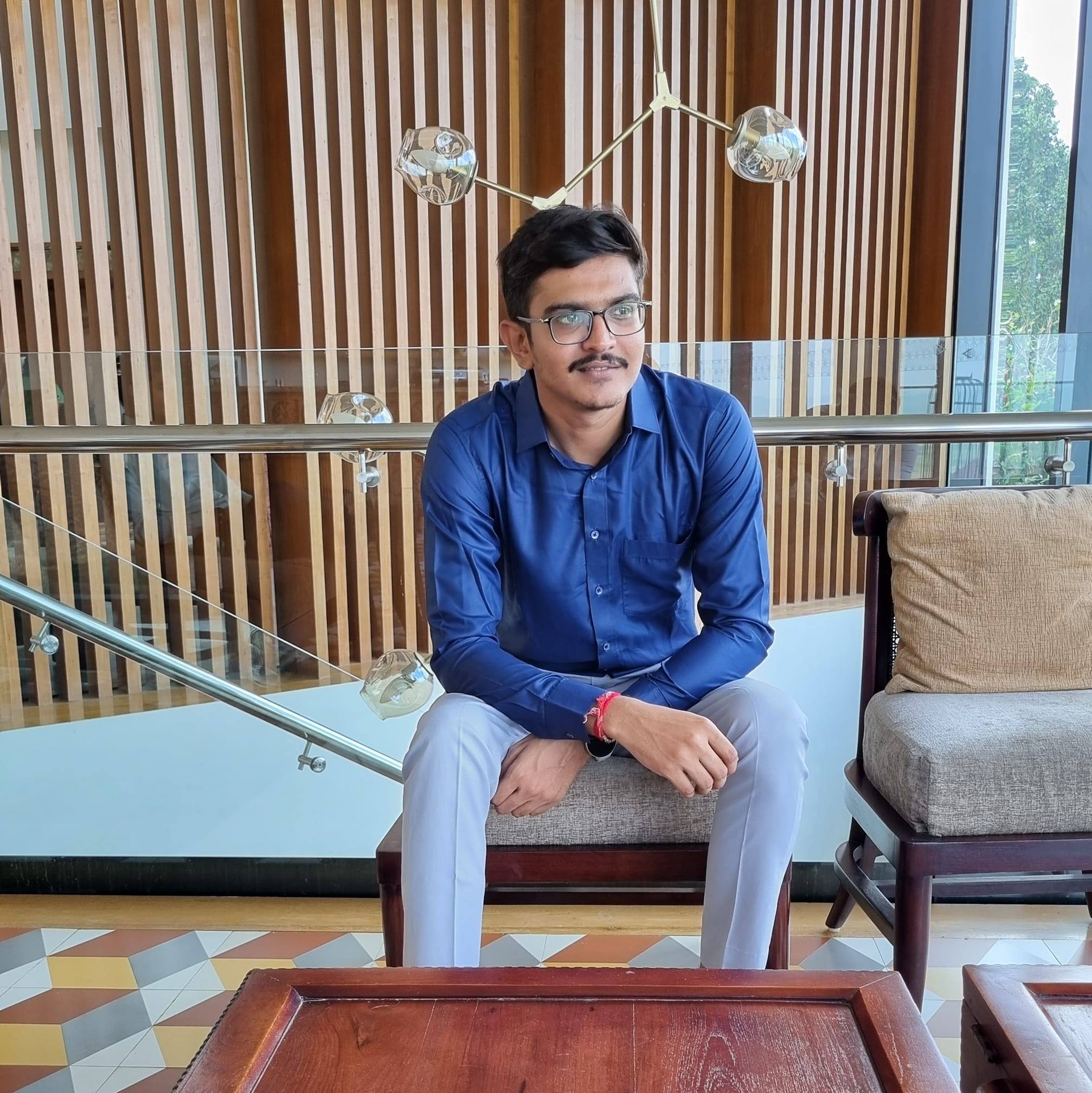